Stallion 51 Corporation has been in the business of sharing the cockpit of their dual control Mustang for over 30 years. During those decades thousands of people have experienced the elegance and grace of the quintessential WWII fighter. Some have come to fly in the aircraft their grandfather or grandmother flew or the aircraft they grew up hearing about or watching at airshows or made countless models of. They have come to fulfill a flying dream that Stallion 51’s instructor pilots are honored to be entrusted with. Hundreds have also come to Stallion 51 to learn how to fly the Mustang safely, taking part in Stallion 51’s comprehensive Mustang check-out training program that will enable them to fly their own Mustang. Stallion has been in the business of making aviation dreams come true but there is another side of Stallion 51; their philanthropic work supporting worthwhile causes.

Recently Stallion 51 helped Corporate Angel Network CAN’s mission to provide transportation for patients to cancer care centers by donating a flight in the Mustang with Lee Lauderback himself at the controls. The successful and well-attended Fundraising event that was in conjunction with NBAA’s 2018 Business Aviation Convention & Exhibition (NBAA-BACE), CAN raised nearly $300,000 to transport cancer patients to treatment centers. The Stallion 51 donation of the Mustang flights that included sharing the cockpit with Lee Lauderback inspired healthy competitive bidding during the Live Auction that added to the overall success of the event.

Stallion 51 has also helped Mercy Flight Southeast/Angel Flight Southeast over the past several years with fundraising Raffles for an Orientation Flight in one of Stallion 51’s dual-cockpit dual-control P-51 Mustangs. These successful raffles have brought in tens of thousands of dollars that help Mercy Flight SE/Angel Flight SE provide free air transportation for children and adults throughout Florida by private aircraft to distant medical facilities when commercial air service is not available, impractical or simply not affordable.

Stallion 51’s philanthropic efforts also extend to educating the next generation of aviation enthusiasts. Stallion 51’s base of operation at the Kissimmee Gateway Airport is a campus of higher learning, teaching pilots and would be pilots the joy of flying the “pilot makers of old”. The privilege of doing so is dependent on keeping aviation relevant and accessible to the next generation. General aviation and the opportunity to fly needs to be tended to and nurtured in order for that privilege to be available for years to come. To that end, Stallion 51 supports aviation education through various fund raising and awareness raising programs.

Stallion 51’s founder and chief pilot, Lee Lauderback has been an airshow performer for several decades. As part of the International Council of Air Shows (ICAS) Lee supports their efforts to provide scholarship funds for young pilots and programs to preserve the history of the air show business, and much more by donating a flight experience to their fundraising efforts through the ICAS Foundation.

Near and dear to Stallion 51’s heart is the SUN ‘n FUN’s Aerospace Center for Excellence (ACE), the STEM education facility located on the SUN ‘n FUN Expo Campus at the Lakeland-Linder Regional Airport. For several years, Stallion 51 has donated a flight in their P-51 Mustang to be used as a fundraiser to support ACE, which is a nationally recognized and honored STEM (Science, Technology, Engineering and Math)-based aviation education programs. The Central Florida Aerospace Academy is a year-round program that includes among traditional academic classes; Airframe & Powerplant training, aircraft restoration and educational activities year-round for all ages. The proceeds from the world-famous annual SUN ‘n FUN Fly-In along with dozens of events on the campus year-round are returned to their aviation-based STEM programs, flight scholarships, and facilities.

Each year, one graduating senior is selected for the honor to fly from Sun N Fun back to Stallion 51’s base of operation at the Kissimmee Gateway Airport with Lee Lauderback in the P-51 Mustang, “Crazy Horse”. The Ace program student is selected not only on his or her scholastic achievements but also their mentorship and advocacy; acting as an ambassador for not only the program but for aviation in general, a Flight Lead in every sense of the word.

Stallion 51 is dedicated to supporting aviation through flight experiences and training, airshow performances and educational outreach support ensuring that aviation, as we know it, has a future. Stallion’s principle of paying it forward is really paying it upwards. 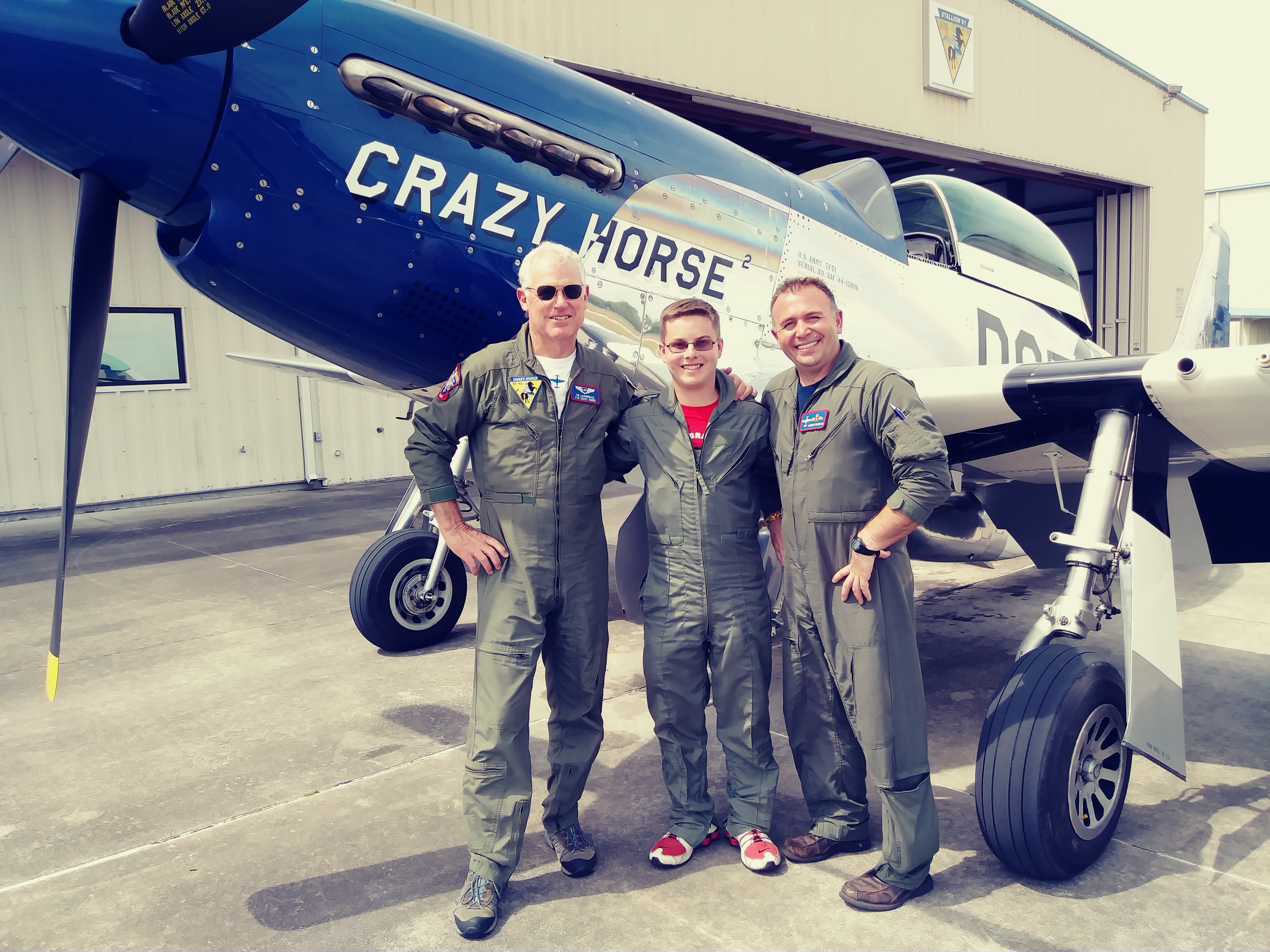