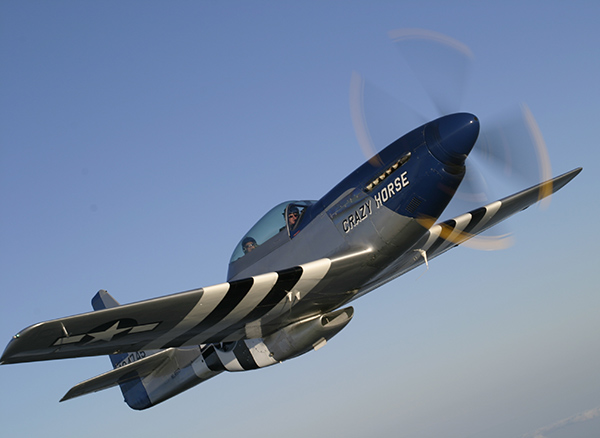 Crazy Horse was built in the North American Aviation Inglewood, California plant and was sold for surplus in 1957 as a P-51D for $1,150.00. David Lindsay of Cavalier Aircraft Corp. took the stock single seat airframe and modified her to dual cockpit/dual control TF-51 standards. This was the last TF off the Cavalier production line. In 1984, Bob Byrnes purchased her and named the plane Rascal III.

Doug Schultz and Lee Lauderback purchased the plane in 1987 and changed the name to Crazy Horse. As a dedication to the Blue Nose Bastards of Bodney, it wears the colors of the 487th Fighter Squadron, 352nd Fighter Group of the 8th Air Force out of Asche, Belgium.

Stallion 51’s Crazy Horse is one of the most recognizable P-51 Mustang in the world.