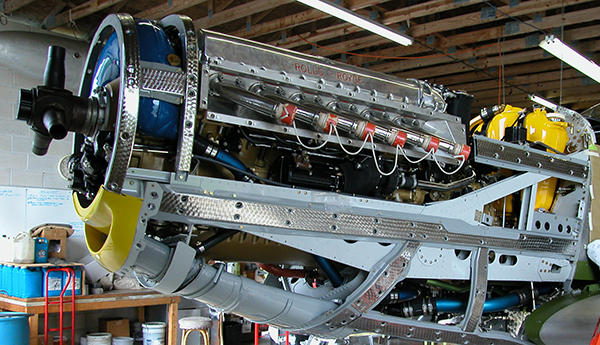 The Rolls Royce and Packard built Merlin engine is universally acknowledged as one of the finest piston engines that has ever been manufactured. Remarkably, over 50 years have elapsed since the last Merlin engine rolled off the production line, yet it is still in widespread daily use in warbird aircraft, including the P-51 Mustang. Just as North American Aviation would never have envisioned their Mustangs would still be flying, Rolls Royce probably never considered that their beautiful Merlin power plant would still be in “front line service” in the 21st Century.

The overall success of this famous engine is built on one simple fact: By employing technology many years ahead of its time, fueled by the urgency of war, Rolls Royce produced a piston power plant that even today has no equal.

Ironically, but not atypical of British industrial practice in the 20th Century, the British government, through the Air Ministry, declined to fund a new engine despite the Schneider Trophy success of the early 1930s. In December 1932 the Rolls Royce board, in the true spirit of British entrepreneurship, elected to finance the engine themselves as a private venture. Thus, early development of the engine was designated P.V.12. No one could have envisioned that this step would contribute so significantly to the Allied victory in the air.

Few would dispute the Battle of Britain was won as a result of the Merlin II and III. Another significant development was the brilliant discovery of a simple idea, by Royal Aeronautical Establishment scientist Miss Shilling:  A small metal diaphragm in the float chamber of the carburetor enabled the engine to continue running during negative G situations in combat.

1938 saw Stanley Hooker join Rolls Royce. It was Hooker who concentrated on the development of the Merlin’s supercharger. Even modern day Merlin builders will tell you that the engine’s supercharger is the finest of its type ever produced. Why? It improves the power envelope from 12,000 to 40,000 feet. This unit is at the heart of the engine’s remarkable performance over a significant altitude range. 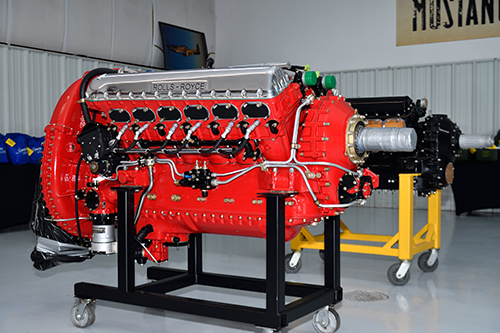 At the beginning of World War II and the Battle of Britain, every front line fighter aircraft was fitted with the Merlin. One of the main Luftwaffe tactics was low flying, and the sea level power of the Merlin had to be enhanced as a result. Rolls Royce achieved a 40% increase in power at sea level due to the supercharger development and this forced the Luftwaffe to fly higher to combat air superiority at low level. With the success of supercharger development, the Merlin XX and Merlin 45 were introduced into the Spitfire and Hurricane, enabling the Royal Air Force to maintain fighter superiority.

During the war years over 150,000 Merlin engines were manufactured in the U.K. and U.S.A. The Packard Motor Car Company undertook the latter and it was this version that was to power the legendary North American Mustang. However, many people don’t realize the huge differences in the Packard built version.

Packard manufactured some 57,000 Merlin engines, over a third of all Merlin production. From its earliest version, the Merlin was clearly a precision, hand built work of engineering art constructed by some of the best British engineers. Even in its infancy the power plant was built in small lots and had a string of design changes incorporated in an effort to squeeze performance and increase reliability in combat situations. The problem, however, was this level of detail was not possible in order to support the mass production needed.  So in 1940, when the British Government turned to Packard for help with production of the Merlin, some provisions had to be made.

In June 1940, Packard was asked to undertake the production of some 9,000 Merlin XX engines. It took just three days for the company to respond positively but on the condition that some modifications would be made to the power plant to enable American accessories such as carburetors, fuel and vacuum pumps to be utilized.

Packard then began the monumental task of organizing an engineering group to handle drawings and redesign for American production. In parallel effort, Packard organized U.S. sources for carburetors, magnetos, spark plugs, and other accessories. Packard assigned some 200 personnel to the project including the draughtsman who would undertake complete revisions of production drawings.

At the outset the Packard engineers ran into problems, generally due to the fact that the engine was not designed for mass production. The fact that the project was completed at all is a testament to the determination and skill of those assigned to the task.

After the end of hostilities in World War II, the Merlin saw extensive commercial service, particularly in Great Britain and Canada, extending well into the late 1950s. The Merlin 600 and 700 series were the subject of testing and modification until as late as the 1960s. Since the Merlin emerged, there have been three categories of operators in aviation. Broadly, these can be categorized as the original Military operators, commercial operators and the present day civilian warbird operators.

In the late 1950s the Mustang was released for sale to the general public. Most airframes sold had low times and warbird owners enjoyed a period of three decades where engine overhaul posed little problem, and very often a spare engine (or two) had been acquired with the airframe anyway. Overhauls undertaken during this time were similar to military schedules where the engines were disassembled, cleaned, and reassembled. Though new seals and rings were sometimes installed, major rework was just not necessary.

We speculate there are approximately 500 Merlin engines (not counting museum static airplanes) in circulation amongst warbird operators – either installed in aircraft or held as spares. Some parts are becoming critical, and there are a number of programs being undertaken to manufacture these critical items to enable the Merlin to run for another 50 years, adding yet more achievements to what is already history.

WHAT ARE YOU WAITING FOR?  COME FLY WITH US!